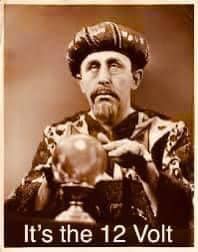 In the BMW i3 Worldwide Group on Facebook, there are a few recurring jokes, and one of the most popular is the 12-volt battery causing every little weird issue. One could wonder why it has a 12-volt battery at all, since the 400-some-volt battery should be able to power the accessories. Additionally, BMW cars have a complicated charging system that requires registration when the battery is replaced, so it’s easy to understand why one might put off dealing with it. The dealers can charge crazy amounts of money for replacement.

My 2014 i3 has an occasional annoyance I attribute possibly to that little 12-volt battery: sometimes forgetting its presets and bluetooth pairing. The more obvious warning is that the battery has discharged while sitting, and while it’s not clear on the screen, it means the 12-volt battery. Mine did it for a couple cold days, so I figured I was due to replace the battery, but the warning stopped, so I thought I might have had some more time.

Over the weekend, I got to see the spectacular (and expected) failure of the car due to the 12-volt battery going very low. I opened the back hatch, stowed all my worldly possessions in the back, closed it, and then the alarm started whistling, and I could not get anything unlocked or stopped by the key fob. The alarm stopped on its own, but I still couldn’t get into the car, and I could see the taillights lowly blinking, so it seemed to be the dreaded 12-volt battery.

The alarm went again and later the horn while I worked. Nothing inside the car would respond either. This was the failure about which the group warned: it can’t do anything, and you’ll need it dragged onto a rollback! The car charges the 12-volt battery when running, but without the 12-volt battery, the car can’t get any of its smarts going to even power up the car. They’ve managed to engineer a problem of old cars into the new.

I learned to pry off the cover to use the mechanical key and to manually pop the hood. I figured I may as well try to get it power with one of those Lithium Ion jump-starter packs I had on hand. (I carry it in the car, so I can still be helpful when others need a start.) I pulled the velcro covers and removed the allen and star screws from the bin and removed the bin, so I could mostly get to the battery. I could just barely fit the little battery clamps in place on the battery terminals. I turned on the battery pack, the car clicked, and everything came back to life. I knew I couldn’t drive with that battery pack there, so I let it charge for 10-15 minutes, turned it off, and found the car still functioned, so I removed the battery pack, and hit the road to drop the car at my local independent shop to have the battery replaced.

A jump-starter did turn out to be useful with the i3, and it saved me a tow for a problem that shouldn’t be so catastrophic.