We can find ourselves thinking, "Where did we used to get our news before Twitter and Facebook?" I know where I got news: Google Reader, but Google shut it down, and eventually gave us a taste of aggregated news in Google Assistant on our phones, but it never really allows us to consciously control it.

Social media’s a bit of a mess and mostly getting worse, so you might want an alternative. Google Reader was based on RSS and Atom news feeds from all your favorite websites, and those still exist.

I still read my carefully curated news feeds using Feedly as a successor to Google Reader. I have hundreds of different news feeds aggregated into this one place (kind of like Facebook and Twitter), but it’s a much more controlled stream of news about which I care. Anyone can create an account at Feedly and get started by searching for a handful of sites you’d like to read regularly. Over time, you can extend and finely tune your feed of news.

If Feedly isn’t quite your style, you can find other news readers, and allow yourself to stay informed without necessarily needing to scroll through all the noise of Facebook and Twitter.

Clojure Core Logic for a Puzzle 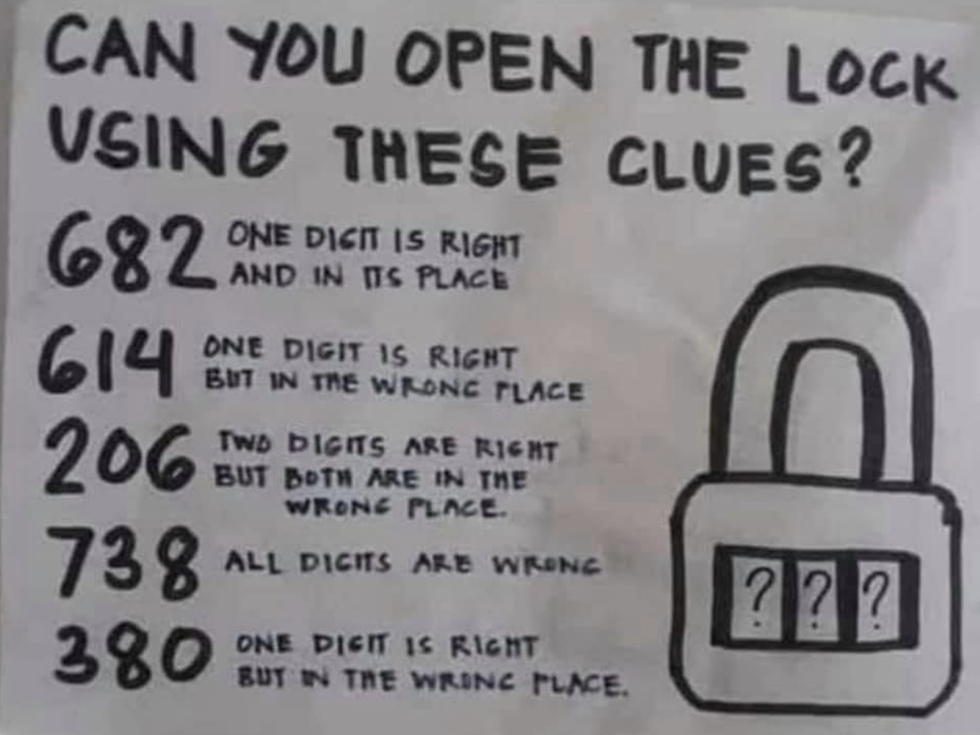 I saw a puzzle pop up on Facebook a couple weeks ago, and it looked like a fun exercise for core.logic, since the puzzle simply requires keeping track of some constraints and reconciling them to one answer.

I had previously tinkered with the core.logic primer and I referred back to it to complete this little puzzle. I had originally coded some more complete rules about exclusion of some values which could have been implied by the puzzle, but I found they could be dropped and still get down to one answer. I started from the entire problem space of all digits and added the constraints to watch and verify each constraint’s effects.

For the past couple days, I’ve started playing with Reagent to do a bit of React programming. I used the Reagent-frontend template for leiningen to get my start. Within a day or two, I had managed to string together a useful little toy application. It only took me a couple hours to get my next toy application put together. Each application is a mere single-page application for doing a single, simple task on a mobile device. It’s a lot of fun, and this opens the door for quickly implementing any toy I want.

In Summer of 2018, I had a Nexus 6P that was on its last legs, and I couldn’t quite wait for the Pixel 3 phones to be released in the Fall, so I picked up a refurbished Pixel XL to tide me over until I could see the new devices. That Pixel XL was fantastic, so I just kept it for nearly 2 years. Back in October, the Pixel XL got its last OS update, and I’ve now started seeing news of Android 11 previews, so I got the itch to replace the old Pixel XL even though it still runs pretty well.

I finally got that Pixel 3 XL just a year and a half later. Compared to the Pixel 3a XL, I figured I’d appreciate the higher screen resolution and the bit of water resistance. This device doesn’t seem too much different from my old Pixel XL, though now I’m buying a couple headphone adapters, and I might just end up using my cheap bluetooth headphones more. I’m excited to have wireless charging again, which I had given up with my Nexus 4. The front-firing stereo speakers are back and sounding good, but it’s an adjustment from the way I used to carry the Pixel XL with the single speaker blasting podcasts from a pocket as I wander the house. It seems that maybe driving the extra speaker may drain battery a little quicker. After a couple days, I had to pop into the Developer Options to hide the notch. It’s just a bad idea: I have too many notifications to allow room for a notch cut out between them.

The Pixel 3 XL seems pretty well-balanced with features I want at a reasonable price (about $300 USD for the refurbished one). I already have the March 2020 update before I’ve even owned the device for a week, and I should have updates through 2021. When updates run out, I’ll look at upgrading again. I’ll need to find a use for the original Pixel as a webcam or something, since it’s still in such good shape and had plenty of computing power.

For the second year I’m taking part in the Advent of Code with friends and coworkers. I’m using Clojure again this year.

The Advent of Code is a story and series of puzzles released as 2 parts daily. There’s a community of people competing at various levels to complete the puzzles faster than others. I was keeping up fine for the first 7 days or so, but I eventually fell behind like many people. Fortunately, everyone can continue to work at our own pace. The puzzles from previous years continue to be available.

I’m happy to find that I’m having an easier time with Clojure this year, and I’m more easily able to use it to describe the algorithms instead of struggling with the language. I publish my code to Github.

I use InteliJ IDEA for work when working on Java code. When the IDE doesn’t work, though, it’s incredibly distracting.

I had a problem where IDEA would not find a few auxiliary classes in my application. It would highlight them as errors in imports, and the search would find the source file, but technically not the class definition. I’d poke at the problem over a couple weeks, but I’d otherwise ignore it most the time until it seemed to be losing more and more of my classes, some of which I was actively modifying.

Re-importing the project’s Maven build didn’t fix it; re-cloning a brand new project didn’t fix it; and re-installing IDEA didn’t even work. Finally, I found IDEA’s config directories, and wiped those out to start over, and that cleared up the problem: I was able to find all my classes again.

Google Calendar makes the world go 'round, especially for kids who travel between households and have lots of school events. There are a couple things you can do to get the most out of your calendar.

Calendar events obviously come with times and fixed reminders so many minutes before the event. It doesn’t matter where you are or where the event takes place: that notification is coming at the same time.

With a location set on each calendar event, other software, like Waze GPS, can continuously watch your current location and offer you a more useful notification giving you time to travel based on distance and current driving conditions along the way.

Most my calendar events have just one start time, but my kids' events aren’t that simple. A marching band performance may be at 7pm, but the bus to the stadium leaves at 4pm. Since we live by notifications, it’s important to get those notifications at the earliest time at which we need to act. The other times are likely just extra details that can go into the event title or event details. I can get a notification for 4pm and realize I don’t need to be there until 7pm, but I can’t tolerate a 7pm notification if I was supposed to be dropping a kid at the practice at 4pm.

If I find it’s important to see notifications for all the potential times of an event, then it’s probably best to break that event into more than one event: drop-off, performance, and pick-up.

This is the first and most useful collaboration feature of Google Calendar. A personal calendar benefits one person, but invite the other participants (the kids), and then they can start adding and maintaining events and following these rules as well.

Since I’ve not eaten meat for over 4 years, and I’ve been evolving my chili recipe, it’s probably time to update it.

I recently gave a talk and demonstration, Browser Automation with Geb, Spock, and Groovy, at the Capital Area Software Engineers group in Harrisburg, PA. While explaining the whole stack of software, I showed how to:

The slides and all the code are available in my geb-preso repo. It includes copies of the code I had prepared, the code we wrote live as a group, and my little toy Planning Poker JS app I was testing.

On Debian, at least when I got started, it was recommernded to have certbot shutdown your apache2 and let it start its own temporary web server to verify the LetsEncrypt setup (--authenticator standalone). The other trick is to register multiple domain names for one certificate by repeating the -d option. I did this with this invocation:

I got it started a couple months ago, but I didn’t know how to setup multiple domain names, so I was always getting errors that this certificate was for a different name: johnflinchbaugh.com instead of www.johnflinchbaugh.com, etc.

That’s all sorted out now, and all my sites should be SSL all the time.

For more information on setup, certbot has a great set of guides based on your OS and web server.

I was seeing the new GIMP 2.10.0 doing bad things with multiple gradients on a transparent layer, so I logged Bug 795866. They quickly fixed the bug within 48 hours, but now I’m sitting here reloading the GIMP news page to see if they’ve cut the newest release.

While I fell behind and caught up a couple times, I caught up one less time, so this project is done.

The sanding stick needed a little adjustment to be assembled successfully.

I finally modeled a sanding stick for small sandpaper belts I bought a year ago to kickstart the project.

I added the Enfocus library to my example Cheshire Cat project to handle dynamic markup on the client.

I added the CLJS HTTP client to my example Cheshire Cat project.

I added a JS/Clojurescript alert to my example Cheshire Cat project.

Older posts are available in the archive.